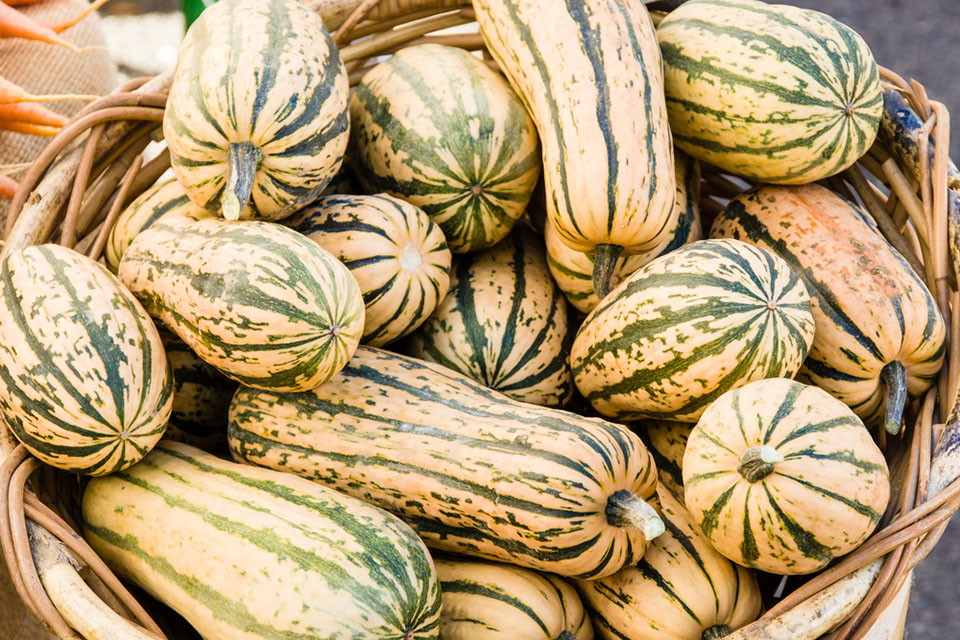 This fall, there is a way to avoid the butternut sinkhole. Try delicata, an heirloom squash experiencing a dramatic revival thanks to the richer flavor and softer skin of a productive variety that first hit seed markets about a decade ago.

Technically a summer squash (Cucurbita pepo), delicata is generally classed with winter squash because it is hard-fleshed and harvested late in the year, but boasts summer squash skin, which is tender enough to remove easily with a vegetable peeler. Also known as “sweet potato squash” for its brown sugar flavor, delicata tastes like a cross between fresh corn and pumpkin pie. Like all hard squash, delicata is high in beta-carotene and vitamin C, relatively low in calories and astonishingly versatile.

With a name like delicata, though, it must be hard to grow, right? Not so.

With a name like delicata, though, it must be hard to grow, right? Not so. Plant it in the summer, and the squash will be ready to harvest after 80 to 100 days in full sun, when the cream-colored skin begins to develop irregular dark-green stripes, like someone has painted the vegetable with an unsteady hand. Unfortunately, delicata is less hardy than other varieties; whereas butternut may be stored up to a year, delicata keeps for just two to three months in a cool, dry place. As delicata ages, the skin develops a deeper orange hue between the stripes, so look for squash with light-colored skin that’s relatively heavy for its size. In general, steer clear of any winter squash that is soft or wrinkled.

According to Kerry Gawalt, owner of Cedar Mountain Farm in Vermont, delicata squash should be harvested in the fall, cured in a warm spot for two weeks, inspected for cuts and then wiped with a mild Clorox solution. “We then store the squash in a 55- to 60-degree room until December,” she says.

First introduced in 1894, the delicata has a shorter shelf life – and smaller yield – that made it less commercially viable than hardier winter squash like butternut, and as a result, delicata was nearly lost during the Great Depression. When scientists at Cornell University bred a more compact, disease-resistant bush variety about 10 years ago, delicata began making a comeback. Now, it is much more widely available at farmers markets, where its flavor has inspired die-hard devotion.

So, welcome back, delicata! Consider the butternut oligarchy squashed.