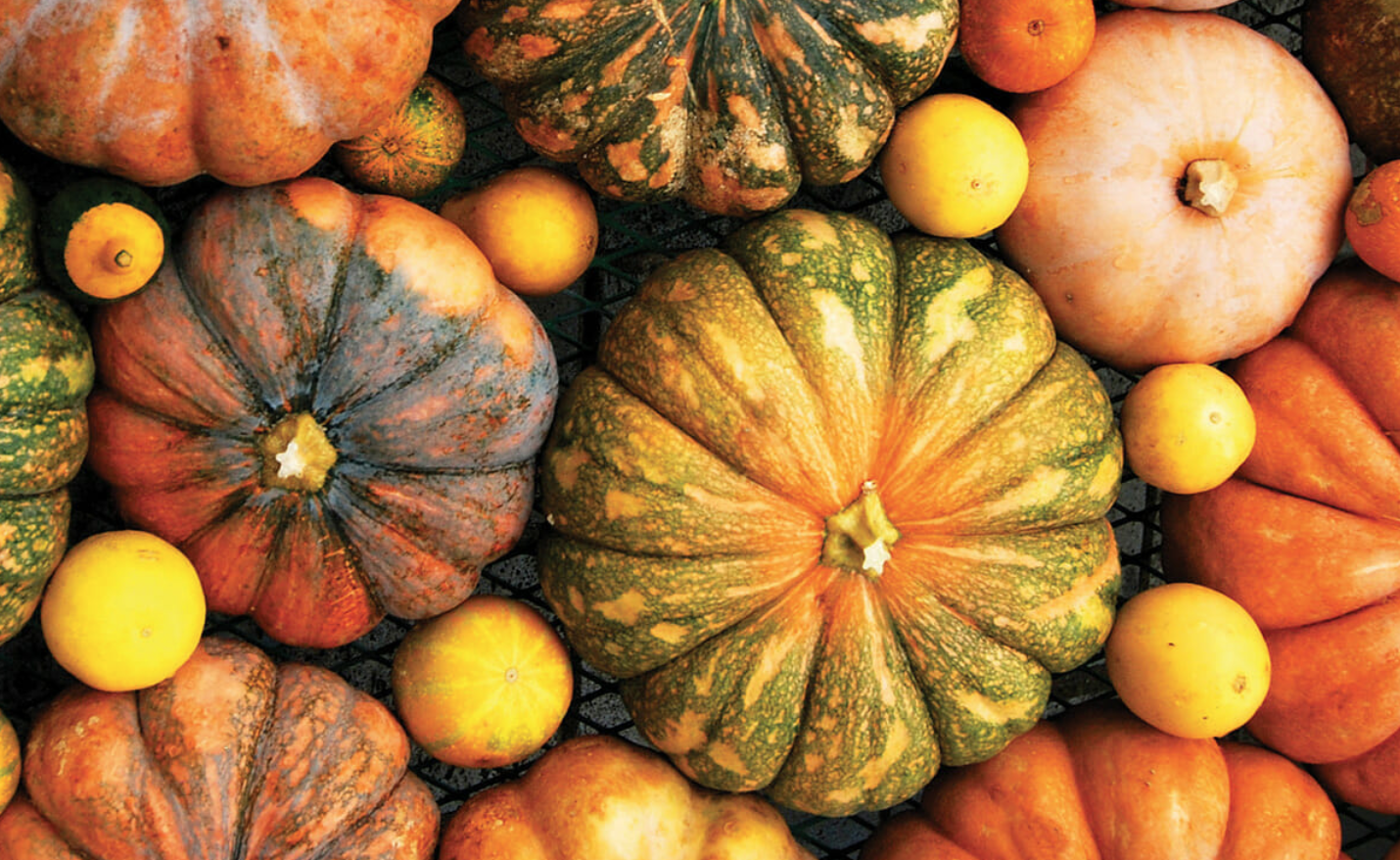 Crystal Bay Farm in Watsonville, California, is sandwiched between two national parks along the coast of Monterey Bay. Farmer Jeff Fiorovich says you can see the ocean from the farm. Along with his wife, Lori, he’s been working the land for 16 years, growing strawberries, raspberries, herbs and other produce, which he sells at a self-serve farm stand where customers cruise by, pick up their goods, and deposit money, all on the honor system. And come Fall, he sells over 40 varieties of winter squash and pumpkin at a classic pick-your-own pumpkin patch.

Modern Farmer: How did you become a pumpkin farmer?

Jeff Fiorovich: It was my wife’s idea. [Laughs] We were looking for a crop that didn’t require harvesting all season, something we could sell during a consolidated time frame.

MF: When do you plant pumpkins?

JF: May and June. I do it a little different than a lot of growers. A lot of growers plant direct seed. I plant transplants. I plant my crop in the greenhouse and then I plant it out. Just because I spend so much on seed and buy so many different kinds of seed that I can’t afford to lose any to birds.

I’m pretty small-scale and I also do a lot of diversity, almost 40 varieties. When I say that, I include winter squash also. I do hybrid and heirloom. I do a huge variety of both jack o’ lanterns and heirloom winter squash.

MF: Tell me about some of the different pumpkins you grow.

JF: Every year I get rid of a few, add a few, test new ones out. With jack o’ lanterns certain things have become popular –bigger stems are really popular and I’ve been picking varieties based on that. Bigger pumpkins in general are becoming more popular, as are the really small ones. On the heirloom side, probably one of my all-time favorites would be Winter Luxury, which is a pie pumpkin. I grow that for anybody to bake pies or any kind of sweet dessert. I marketed it to some local craft brewers the last two years and they’re making pumpkin ale with it. It’s not your typical pumpkin beer you see at the market at this time of the year, all cinnamon and spice.

There are three main kinds of squash that growers grow. There’s pepos, which are jack o’ lanterns, acorn squash, zucchini, pie pumpkins. There’s maximus, like the giant pumpkins people grow, the 2,000-pounders, buttercup squash, Hubbard squash, banana squash, lots of good edibles in that family. And the third one is moschata. That’s the butternut family. There’s LOTS of good squash in that family. Moschata is more of a tropical squash typically. It has a longer season, it has that brownish tinge to it.

MF: How do you recommend eating pumpkins?

JF: If you’re going to be preparing it further, like pureeing it into something, you just cut the thing in half, take the seeds out, put it cut-side down on a cookie sheet and put it in the oven. I don’t recommend boiling or steaming it. The flavor intensifies if you roast it. I use the Marina di Chioggia and the Musquee de Provence, and cut big wedges of it, five-eighths of an inch thick, and marinate it in olive oil and garlic with some herbs and throw it on the grill. Just flip it over, not too long, it cooks really fast, and makes a great appetizer or side dish. I recently discovered that some of these squashes can be eaten raw. The Musquee de Provence is the first that I discovered if you grate or slice it sashimi style over salad it’s good and it’s actually good juiced too. A friend of mine brought a jar over last year, and it was the most fluorescent orange juice I had ever seen in my life. It was good, really good, which was surprising. I never would have thought of doing that.

Reprinted with permission from Notes from the Larder by Nigel Slater, copyright (c) 2012. Published by Ten Speed Press, a division of Random House, Inc.

Initially, this was a side dish to go with a flash-fried steak. But its sticky, sweet sharp qualities led me to serve it as a dish in its own right. In which case there is a need for a dish of steamed brown rice to go with it. This is a genuinely interesting way to combat the sugary, monotonous note of the pumpkin. The colors are ravishing.